Preparing Contact Centers for the Advent of AI – Part 1 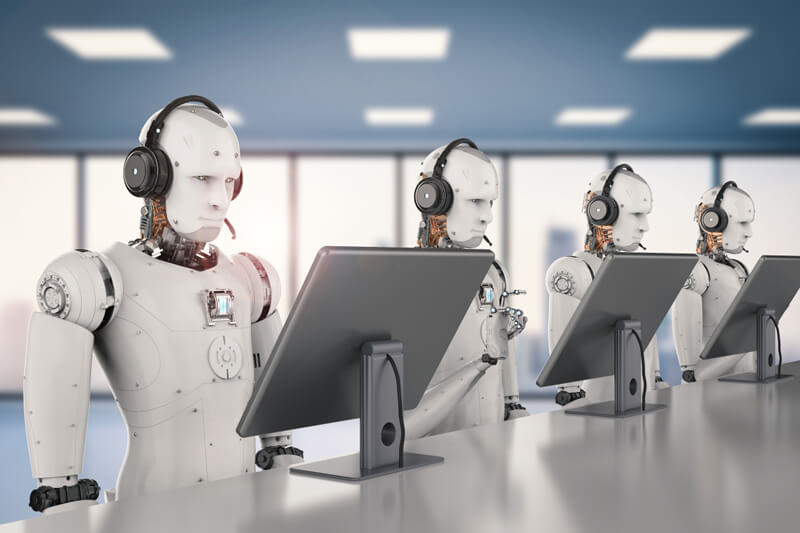 In 2013, economists Carl Benedikt Frey and Michael Osborne of Oxford University found that a whopping 47% of jobs were at risk of displacement due to the coming Artificial Intelligence (AI) revolution in the U.S. labor market. Telemarketing came in at #1 as the most likely job to be automated (99% probability). Data Entry Keyers were a close second (also 99% probability). Not far behind were Dispatchers, Receptionists, and Information Clerks (96% probability).

This is Part 1 of a series of articles that focus on the incredible impact of AI on the contact center industry. Part 1 deals with the causes behind this impact, gives specifics on how this impact is taking place, and offers a rationale for why contact centers must take note and prepare for the revolution. Part 2 of this series will focus on the Total Cost of Ownership (TCO) of the New Contact Center, and make the case for AI investment using a Return On Investment (ROI) analysis.

From a 2017 Deloitte survey of over 450 global contact centers:

“More than 1 million jobs are at risk in four countries alone: the United States, Poland, India, and the Philippines.”

The ratio of human-powered work to automation-powered work can – and will – shrink. A report by management consulting firm A.T. Kearney in 2016 concludes that, a software robot costs one-third as much as an offshore employee and one-fifth as much as onshore staff. A.T. Kearney estimates that robotic process automation can yield cost savings of 25%-50% for many business processes. Indeed, A.T. Kearney reports in 2017 that “More than 1 million jobs are at risk in four countries alone: the United States, Poland, India, and the Philippines.” The report goes on to state the following:

“In fact, automation creates new, more highly skilled and more highly paid jobs that are required to manage mature technology, bringing higher salaries to workers. These new jobs, however, do not always go to those who lost their positions or even stay in the same country, as some new jobs are created in closer proximity to existing operations. The overall impact of automation on a country’s labor force, then, is far from straightforward.”

As call centers automate and digitize, utilizing technologies such as AI, they will need to develop skills in managing automated workflows, and training approaches for AI, in addition to servicing increasingly complex customer needs. Success at developing these new skills and seamlessly integrating the technology into call center processes is paramount.

The changes that are coming to contact centers are not just due to the level of automation that they can employ, they are demanded by their customer base for the following reasons:

Evidence exists that, where customer interaction is concerned, human customers often prefer to deal with other humans rather than with computers, particularly where advice is being sought.

“AI technology is not yet ready to take over the job of a human being entirely, in areas that require human contact”

A 2016 Accenture Global Consumer Pulse Survey indicated that 83% of US consumers prefer dealing with human beings. Part of this preference is likely linked to the sub-standard performance of human-computer interfaces in the past. On the flip side, human operators can only deal with so much information. Today, there are literally gigabytes and sometimes terabytes of data available that a human operator couldn’t possibly access in a meaningful way, but that could potentially contribute to an improved customer experience (CX). How do we marry these two apparently conflicting points to arrive at an improved CX?

AI technology is not yet ready to take over the job of a human being entirely, in areas that require human contact, for two reasons:

“each of these capabilities… when combined…become a powerful tool…drawing out knowledge that would otherwise never have been available, and applying that knowledge in real-time during a call”

While we can’t entirely replace human agents with AI agents for all functions, we can introduce an AI Virtual Assistant that can participate in the interaction in the background, assisting the human operator while not being apparent to the customer. To that end, our AI Virtual Assistant is going to be good at 4 types of processing:

Taken alone, each of these capabilities could prove of some value. When combined, however, they become a powerful tool that allows us to take resources that previously were of little value – such as hours of call recordings – drawing out knowledge that would otherwise never have been available, and applying that knowledge in real-time during a call. Let’s use an example narrative to better illustrate how such an AI Virtual Assistant might aid a human operator.

Even before the phone rang and while the call still sits in the queue, the contact center’s AI Virtual Assistant judges it to be urgent. In a few milliseconds, it made that determination by acting on the context of the call:

Based on that context information, the AI Virtual Assistant moves the customer call to the top of the queue to be answered next – and in seconds, the phone of the human agent rings and he moves to answer the call.

All of the above occurred before the phone even rang in the contact center. What just happened here? Let’s take it point by point:

The human agent answers the call. As the customer details the problem, and describes her location…

The above description is not all that far fetched, and we can expect scenarios like this to become common place over the next 5 years. In 2016, Vonage partnered with IBM Watson to work on a number of AI integration solutions. Both companies have packaged their products in order to provide an Application Programming Interface (API) into their respective functionalities. Vonage acquired Nexmo in 2016 to provide such an API into their own products, while IBM created Intu, a systems-agnostic version of Watson that allows developers to embed artificial intelligence (AI) functions into devices, robots and applications. This is one example of the partnerships that will evolve to take contact centers to a new level of excellence.

Not all AI improvements will require such a level of sophistication. Other automation opportunities exist when interacting with customers such as account profile update, and Frequently Asked Questions (FAQs) that might be entirely handled by an AI Virtual Assistant through a chat, text, or even a voice based interface. If the AI agent detects that a human agent is required it can route the call appropriately.

Stay tuned for next article in this series – Preparing Contact Centers for the Advent of AI – Part 2: Estimating ROI and Benefits. In Part 2, we propose to cover:

We’ll cap that discussion off with the presentation of an ROI calculator. We’ll see you then!